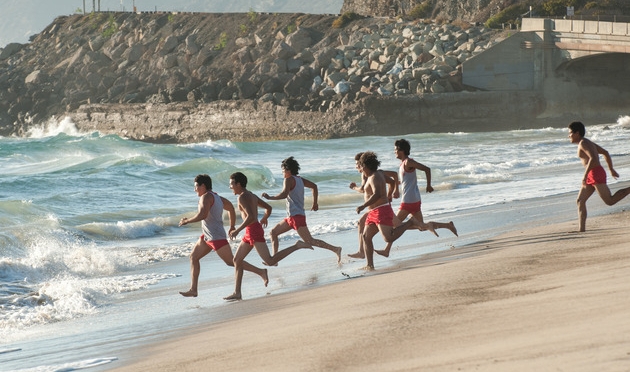 My friends at Runners World came up with this list of 12 Great Running Movies earlier this year, but it didn’t include McFarland USA, which was released days after the list was posted.  It’s a shame, because the movie, being released on DVD this week, belongs on the list.

The movie takes us through the back story of a cross country team forged from the immigrant families of San Joaquin Valley, CA.  As far as I know, it’s the one and only theatrical release that delves into the dynamics of a high school cross country squad, where individual achievement is harnessed like sled dogs to pull the team to ultimate victory.

When I walked out of the theater in February on opening weekend, I was with my two daughters– one a teenage athlete and the other a third-grader with her entire sporting life in front of her.   I was thrilled that they could both share the theater experience with me– it’s the only movie we’ve seen together all year.

I was especially proud to share with them a running story, because I had recently completed my first cross country race in more than 30 years, and was writing about my experience for an article that is scheduled to appear in Runners World September 2015 issue.

What my daughters and I saw on screen was a good old fashioned Disney fairy tale, with the redeeming quality of being based on a real story, the rebirth and rise of the McFarland High School cross country team.

My teenager got to see the film’s version of a high school that was much different than her own.  Her high school sits on a lush, shady, sprawling gem of a campus full of well-appointed brick structures and a massive new athletic center.  McFarland High sits across the street from a prison.   She regularly gets new team gear from the school, the McFarland moms have to throw a tamale sale to get them uniforms and running shoes.

My little one got a glimpse of all that too, at a time when she is still forming her understanding of how to succeed in life.  A few months later, when I was playfully running in front of her after picking her up from school, she pulled up next to me.   “I’m Danny Diaz!,” she shouted.  We hadn’t spoken about the movie at all after the night we saw it, but that lasting image of an underdog coming from way back had stuck with her.  I also hope she remembered that Danny, his brothers, and friends became better runners through hard work and with the love and loyalty of their family.

My kids face, and I for that matter, will have to keep facing unique challenges of our own in our lives.  Be they the ordinary disappointments of tests gone poorly, or jobs not secured or more imposing obstacles like injustice and intolerance for the choices we make or the people we become. 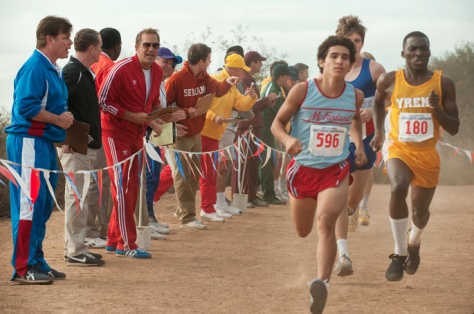 I was grateful that McFarland USA was able to show us how this group of boys, fueled by the passion of their coach, were able to overcome so many difficult obstacles to reach their own goals.

Cynically, I could see why the movie was released on Oscars weekend– it is not the kind of movie that gets nominated for awards.  But it did get generally good reviews, and hit a respectable $44 million at the box office, on a production budget of $17 million, according to The Numbers.    It’s sure to be a welcome Friday night family movie this weekend– and an inspiring Redbox rental this fall when high school and college cross country season commences.

But when I walked out of that theater I had no desire to be cynical.  The running scenes were beautiful, the drama suitably constructed, the characters portrayed deeply enough for us to care, the story real enough to matter and the ending satisfying enough for my little one and I to remember and relive months later.

Yet the best part of the movie for me, they may not remember at all.  It was the epilogue, just before the credit role, where we get a look at the men those boys became, as they ran down a sun-scorched California road.  They each had their own ending– and presumably some more happy than others.  But seeing them still running, and realizing they looked a little like me running along the pavement to whatever lay ahead, gave me chills.

If you are a runner, you will appreciate the portrayal of the way the distance running can test a person’s soul and drive. If you are not, you will still be moved by the film’s simple, inspiring and accessible story for all ages.

I’ll resist the temptation of calling McFarland USA the Hoosiers of cross country, because that basketball movie is at another level of artistic and emotional vitality.  But it holds the same power to open eyes to the beauty of a sport I love, the payoff of hard work, and the indomitable human spirit possessed by even the young and marginalized among us.

Rent it the night before your next big run.