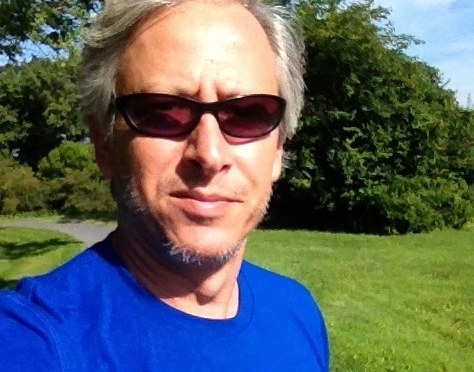 How did you mark your last “big” birthday?  I marked my birthday this year the same way I did last year– by going alone to a deserted jogging trail to see how fast I could run a mile with only my breath, my pride and my fear of slowing down before my time.  Last year, this Birthday Run was in the middle of training for my first competitive mile race in more than 30 years.    There was a lot at stake for me last year, in that I was turning the big 5-0 and taking a mulligan on trying to do what I was never able to do as track athlete: break five minutes in the mile.

I would say I looked hopeful and ready.  I knew I wasn’t in good enough shape yet, but I had a deliberate plan that I trusted.

This year, the day marked my first timed mile since October of last year.  I feel a little embarrassed to admit that now, given the response to my article in the September 2013 issue of Runners World. So let me explain.

The official story is that an election-night car accident, a lazy winter of recovery and a spring that sprung into toe surgery (bone spurs on my left big toe knuckle– I’ll show you my scar if you show me yours) gave me ample excuses to stop my intense training for a while, which turned into longer than I planned.  But perhaps here’s the real reason:

I never signed up for another race after running the Runners World Half in October.

Then in the best shape in years, I kidded myself that I could just maintain that edge without a race to look forward to and train for.  Big mistake. For me (and maybe you?) not having a race scheduled meant not having a reason to fend off the late night snack binge but finding plenty of excuses to not show up for track intervals or long Sunday runs.  I’d share them, but I don’t want to give you any ideas.

So I toed the starting line of my mile on my 51st birthday looking like this.

I was both anxious and relieved. Anxious because I knew my weight had gone up and my conditioning had gone down as I got back up on my feet after the winter hibernation, the ongoing physical therapy on my neck, topped with about 6 week of crutches, surgical boot limping, labored walking and geriatric-paced running.

Yet I was relieved and alive in a way I can write about, but can’t truly explain.  The thought that came to mind was that of a low-budget super hero, incognito behind my shades.  I slowly slipped on the cape (i.e. removed my shirt- gasp!).  It was like I crossed through a threshold, leaving behind the dimension of lethargy and injury and weakness into the realm of the race, the secret world of the strong. In training again.

I could sense I would now transformed into a radioactive warrior with immense powers to push  myself to new limits into an unmappable, alien territory where I was no longer Ordinary Guy who jogs.  I was now Runner Man, protector of health, defender of speed, the huffing and puffing  weirdo. The Middle Age Boy Wonder.  I ran my heel across the cinders for a proper starting line. And off… Flame on!

The delusion of being a cross between The Flash and the Human Torch lasted about 30 yards when the reality hit– I was further behind than I thought.  My mind remembered what it was like to be in shape. My lungs and legs? Not so much. The pain and suffering lasted a little over 7 minutes, hardly worthy of mentioning other than as a footnote and another starting point for my next comeback.

And so. Here I go. I’m signing up for The Fifth Avenue Mile again.

Join me?  No experience necessary. BYOC*

*Bring Your Own Cape